We are thrilled to announce that the Frances and Ronald Jaffe Foundation, along with another anonymous donor, has pledged to support our new endowment.

Without the Vision for Reading program, an aspiring architect might lose sight of her goals.

Without Algebra Counts 2, a budding baker might put his eggs in the wrong basket.

Without the R.E.A.L. Lab, a promising printmaker might not get the picture.

Without Planting the Seeds of Knowledge, a blossoming agriculturist might twiddle her green thumb.

Without the Science Fair, a prospective pathologist might feel out of sorts.

Without the Sneaker Exchange, a future fitness trainer might be out of his league.

And without Integrating Robotics into Physics, an eager engineer might blow a fuse.

This is why we decided our family’s private non-operating foundation — the Frances and Ronald Jaffe Foundation — will be dedicated to supporting the Education Foundation of Indian River County endowment in perpetuity.

Our New Endowment Founded in 1999, the Jaffe Foundation was imagined by Ronald Jaffe, immensely missed father and grandfather, while vacationing with his wife, Fran (more affectionately known to us as Granny Franny).

She recalls: “We were on a walk, and Grandpa said to me out of nowhere, ‘I’d like to start a scholarship foundation,’ and I said, ‘You’ve got to be kidding me! OK, let’s do it.’”

While the idea was introduced as a casual comment, it only made sense. One of their daughters was a superlative school psychologist; their daughter-in-law was president of the Parents Association and later became a prominent elementary school educator; their son-in-law was an adored art teacher and department director; and their youngest daughter was on the board of the EF-IRC.

All four of their grandchildren were enrolled in schools in Indian River County, and one advanced to the Intel International Science and Engineering Fair after winning the EF-IRC competition. Two others went on to pursue careers in education: a grandson who teaches autistic children in a residential school, and a granddaughter who worked as an education reporter.

But aside from serving as a way to give back to the community we’ve been a part of since 1969, the Jaffe foundation also provides a path for us to give forward. For posterity.

—The Alexander, Jaffe and Kornicks Families 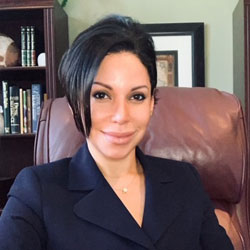 Laica has also served as an Empowered Official overseeing all International Traffic in Arms Regulations (ITAR) related activities and responsible for the strategic alignment of resources and staffing in support of global supply chain. Laica holds a bachelor’s degree in technical management from Embry-Riddle Aeronautical University and professional certification in government contracting from The George Washington University, School of Business.