What Science Fair Has Done for Me

As a little girl, I always enjoyed learning new things, and investigating why things happened, how they worked, and always wanted to expand my knowledge. In fifth grade, I was eager to do my first individual science fair project. In previous years, we had always done class projects, but this year was different – it was my first time doing my own individual project, just me and my own ideas. I remember coming up with my topic, doing the experiment, and putting my board together. I ended up receiving honorable mention at the Regional Science Fair. At the time, I was proud of myself, but wanted to do better. I wasn’t discouraged, but rather encouraged to continue on researching. This was my first time being exposed to true research.

Fast forward 6-7 years later… a classmate and I decided that we wanted to do a high school level science fair project. I had been interested in forensics, but didn’t know too much about it besides what I watched on television, which we all know isn’t completely accurate. My science fair partner and I did our project on luminol reactions, which is a chemiluminescent reaction that emits light upon reacting with blood. Luminol is a chemical utilized in crime scene searches for trace amounts of blood. Being exposed to my first interaction with forensic chemicals was incredible, and further sparked my interest. By participating in the science fair, I was able to research about my future career field, which led to my passion in forensic. My science fair partner and I received first place at the Indian River County Regional Science Fair, and were sent to represent the county at the Intel International Science and Engineering Fair in San Jose, California; an experience that would be unforgettable. I was able to meet the “best of the best” peer student researchers from around the world. Being surrounded by others who had a passion for science just like me was incredible. 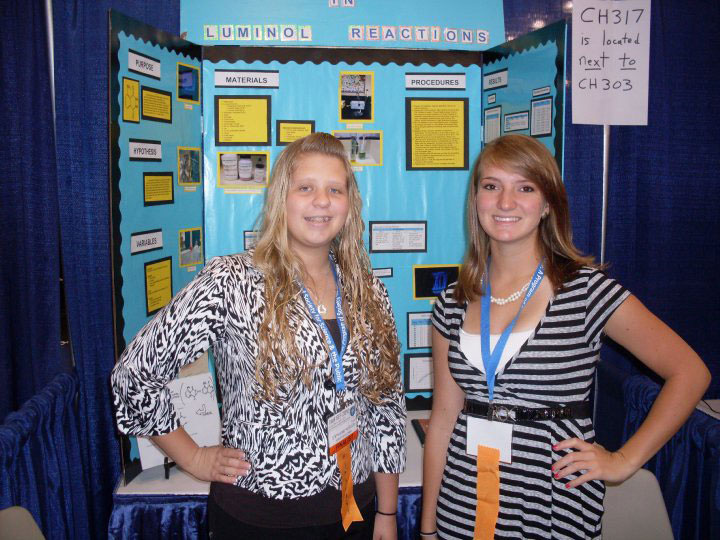 After returning from the science fair, my project was officially over and I were to graduate high school. What now? Thanks to my science fair project, I continued on with my interest in forensic science and pursued my Bachelor’s degree in Forensic Science, and four years later, I was hired as a Crime Scene Investigator, still utilizing to this day those skills and information I learned from my high school science fair project. If it weren’t for science fair, I wouldn’t be where I am today. Science fair sparked my interest in my career field and allowed me the opportunity to research current topics in my field of interest. It also taught me the research process, and ultimately how to present my results in front of judges, which correlates to my career now, testifying in front of a judge and jurors.

Over the past five years, I have had the great pleasure of being a science fair judge for the Regional Science Fair. I love being able to give back to a program that gave so much to me, and to help motivate the young future scientists.

Bill Nye the Science Guy once said “There’s nothing I believe in more strongly than getting young people interested in science and engineering, for a better tomorrow, for all humankind.” Science fair research promotes advanced critical thinking and allows for the development of new knowledge to be utilized by future generations. Our future starts with you – student scientists who are researching new topics and reinventing the world.